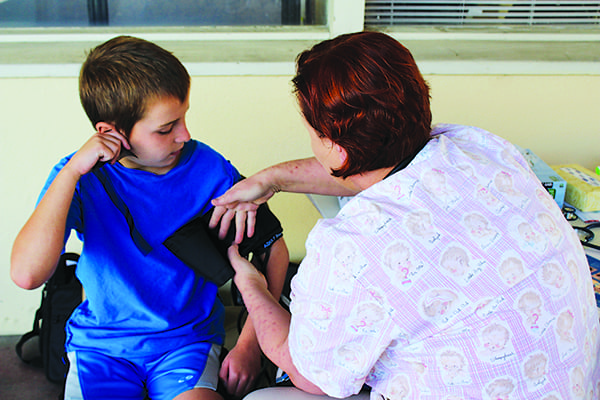 By Shannon Carr, Communications  & Social Media Specialist
Visiting the doctor’s office can be scary for all young children. For a child with autism, that fear is often compounded by other developmental issues they inherit.

“About 40 percent of children with (Autism Spectrum Disorder) do not talk at all,” according to the Centers for Disease Control website. “About 25 to 30 percent of children with ASD have some words at 12 to 18 months of age and then lose them. Others might speak, but not until later in childhood.”
Ute Ren, a Morgan Autism Center parent, knows the situation all too well.
“Our son is not able to comprehend what will be happening in a doctor’s office,” she says. “So I try to reenact it at home, and to make him familiar with the equipment through repetition.”
Because of this, “the last doctor visit was much better,” Ute says. “I was able to hold the stethoscope against his chest while the doctor was listening.”
Wanting to share this success with other parents, Ute — who is also a retired nurse — implemented the desensitizing practice at Morgan Autism Center nearly a year ago.
“I am so happy to volunteer and hope to develop more programs to help with the preventive care of our kids/adults,” she says.
On a monthly basis, Ute visits with students and adults. She reenacts taking their blood pressure, weighing them on a scale, checking their height and listening to their chest with a stethoscope. This happens all at the individuals’ own pace rather than within the time constraints dealt with at the doctor.
“I try to make the kids and adults familiar with the different equipment they would encounter in a doctor’s office,” Ute says. “Even if it seems like a tiny step, it can accumulate to a skill over time so that our kids can actively participate in their own care.”
In February, she held an in-service with Morgan Autism Center employees about the correct technique using an
EpiPen® Auto-Injector. This is a disposable, pre-filled automatic injection device that administers epinephrine in the event of a severe allergic reaction.
Despite Ute’s work so far, she believes there is more to be done.
“My next project is the dental care of people with a severe developmental disorder,” Ute says. “Most information is geared to patients who have the cognitive ability to follow directions.”
So she is currently gathering more information focused on addressing those needs.
Executive Director Brad Boardman explains his gratification with Ute’s services.
“Doctor’s appointments can be very intrusive for anyone,” he says. “Parents often struggle with getting to medical appointments due to the anxieties their children feel.”
Brad concludes: “This activity is designed to get students comfortable with basic doctor’s office behaviors so that parents can better access the necessary care for their families and to make a trip to the doctor a positive experience for everyone.”